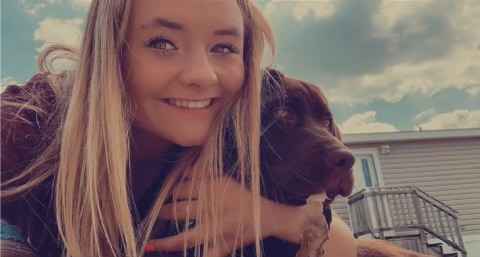 Hailey has been a receptionist with us since June of 2021. She has quickly extended her training and helping with our grooming team and doggy daycare business! A graduate of Venice High in 2017 (Venice Florida) though was primarily raised in Naples Florida. In 2017 Hailey came up to Michigan to pursue a degree at MSU but wasn’t sure what she wanted for a degree and decided to take time off. It was then when Hailey started working in a vet clinic and has been in one ever since and couldn’t be happier.

Hailey has a pet cat that she rescued a few years back as a kitten and has more of a personality as a dog than a cat and she loves her for it. If she was a dog, she’d definitely be a pug because she’s so lazy and a little on the chunky side. It make sense though seeing as her “sibling” that she grew up with was a pug that Hailey rescued around the same time who has sadly passed on since due to health issues. Hailey’s also a very devoted mom to her toddler, Maisey. Her daughter keeps life exciting and definitely a bit chaotic but in the best of ways. With endless laughs and smiles, her daughter absolutely loves animals especially dogs and dinosaurs. She loves telling you what a dinosaur says!