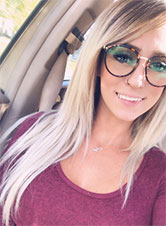 LeAnn is one of the newer members of our receptionist team. She graduated Whitley County High school in 2002, born and raised in southeast KY amidst the Appalachian Mountains, she decided to go on a new adventure in 2004 after meeting the love of her life at a custom car/truck show in Indianapolis, IN. She welcomed her first son, Trenten, in 2005 and married her husband Curt in 2008. Years later a new adventure began with their second son, Asher, who came into the world in 2010.

LeAnn’s family is always busy with new projects to work on at their pole barn, sometimes it’s an old hot rod other times a vintage boat needing restoration. At home she has two faithful shadows known as Auto the labradoodle and Frenchie the French Bulldog. LeAnn, her family (and the dogs) spend their time in the warmer months out on their pontoon cruising Gun Lake. You can find them fishing or parked next to friends just enjoying the day together. LeAnn also has a flock of ducks she lovingly named the Waddle Squad. She has a flock of 18 consisting of Cayuga’s, Jumbo Pekins and one Cayuga/Pekin/Mallard hybrid.
LeAnn has dreamt of being a Vet since she was just a little girl, and although she didn’t live out her dreams of going to med school, she is ecstatic to be a part of such a wonderful team helping animals here at Dorr Veterinary Clinic.